Yazi Dogo – Hausa Theater Icon from the Republic of Niger

Yazi Dogo’s life and his career represent untoward loyalty and devotion to his language, his culture, and his country.

El-Hadj Yazi Dogo was born in the Republic of Niger during the 1940s. He went through the French language primary school and secondary school in pre-independence Niger, and went on to become an educator in the early part of his career, and later moved up through the hierarchy in education. He was one of the first primary teachers to teach the new Hausa curriculum that was introduced into the public school system in the 1970s. During a visit to Niger in 1974, I was fortunate to visit his school and to be introduced to the methodology that was adopted in an environment where French had always been the exclusive medium of instruction. This was a pioneering effort that led to the introduction of Nigerien languages into schools throughout the country.

Yazi Dogo, or just Yazi, as he is known throughout Niger, is famous for his theater group which has performed for the past 30 years throughout Niger and West Africa. From comic through educational theater, he and his group have performed before heads of state, and before village children. Through the comedy and the laughter there are always deeper messages and lessons to be drawn from his work.

Chief of Culture in Niger

In January of 2021, El-Hadj Yazi Dogo was named by the Republic of Niger as the Chief of Culture in Niger. 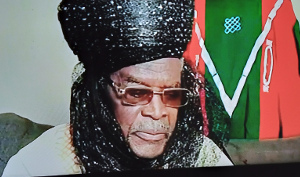 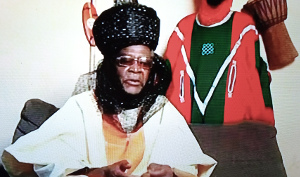 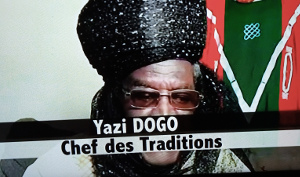 A Video Tribute to Yazi Dogo

Presented here is a selection of the Hausa language video material about the life of Yazi Dogo filmed by John Hutchison in Niger in 2004, while on an ALMA trip working with authors. There are 6 pieces now, and more will follow. Eventually, when complete, a Hausa documentary on Yazi Dogo will be produced, in tribute to the importance of his work. First, colleagues at the Oumarou Ganda Arts Center talk about Yazi. Then he is shown with his best friends gathered around the table merchant under a tree. In the 3rd piece, Yazi goes to visit Oumarou Naino who was one of the founding members of Yazi’s theater group (K’ungiyar Yazi Dogo). Naino has been ill for some time. Next is a visit to a Hausa language primary school in Niamey, one of the kind of schools that Yazi Dogo pioneered in Zinder, Niger in the 1970s. The last two pieces involve Yazi and the members of his theater group. The actors talk about Yazi and his importance as an artist, and also in the final piece they show how they interact around a theme in order to produce a play.

The entire set of materials has been transcribed in Hausa and attached here as a pdf.

Here are 10 proverb enactment scripts that were done by Yazi Dogo’s Hausa theater troop. The document starts with the 10 skits listed by number and the actors that played in each one of them. This is followed by the 10 proverbs, one by one, each with the script of the skit in Hausa, and some exercises for students after each of the 10 skits. They also have little vocabulary lists for the words in bold characters to help students.
10 proverbs and skits (pdf) (66 pages)