The Mina language is spoken in Togo.

Songs of the Tromakui Dani Shrine

Three singers from the Dognran Family 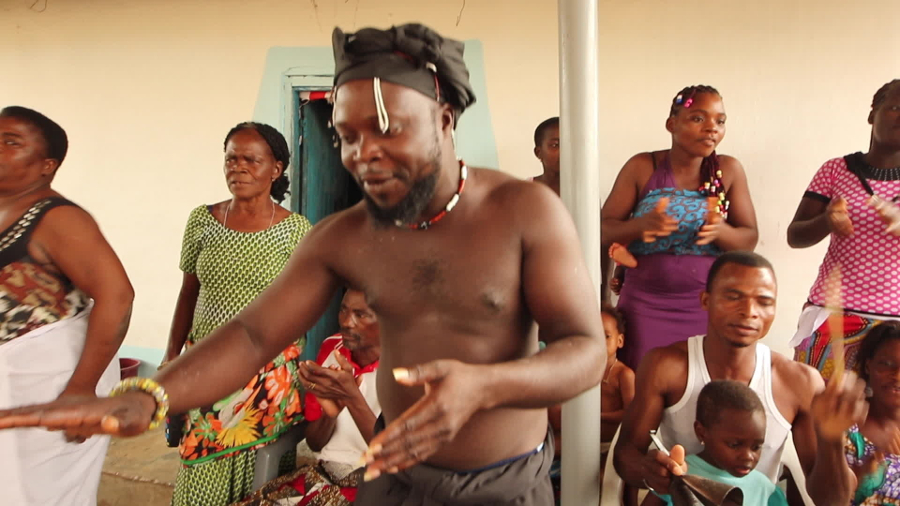 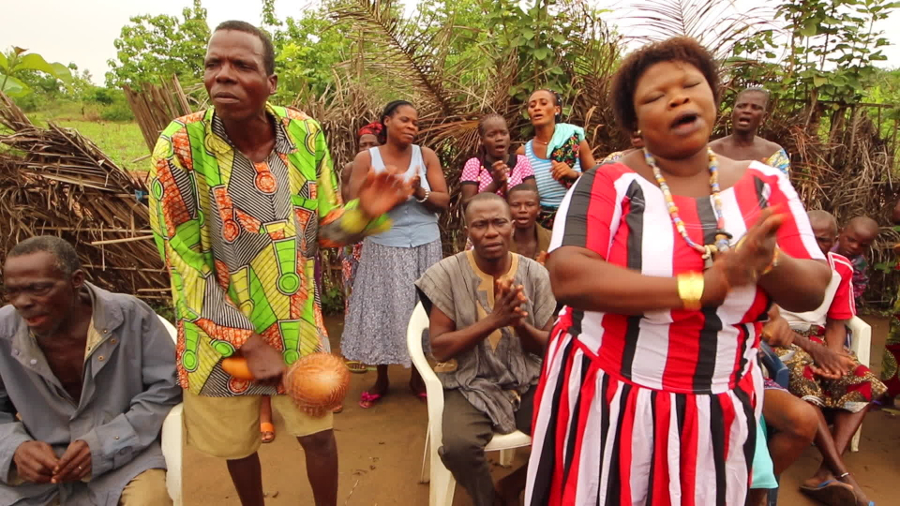 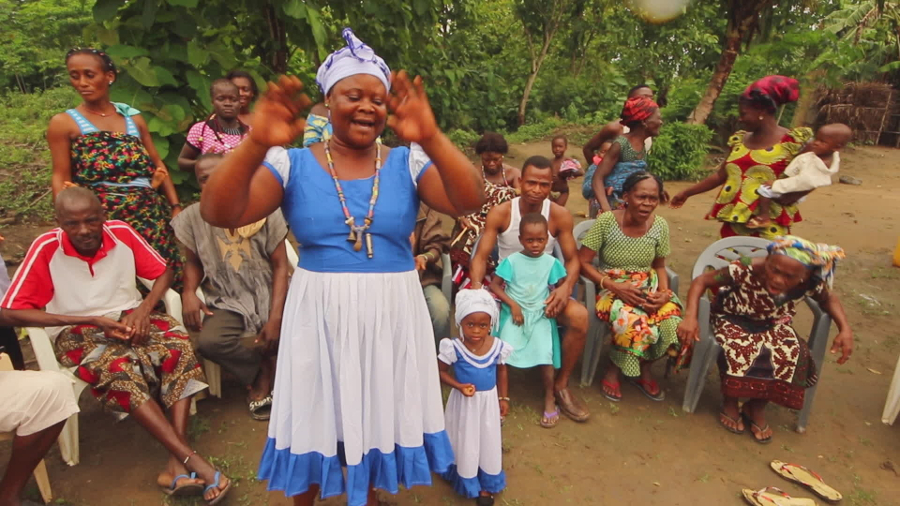 The village of Koveto is surrounded by corn and yam fields, and several varieties of palms and coconut trees, in a lush and wet landscape. The area in general has deep roots in vodun spirit worship and this particular village represents communities entirely dedicated to spirit worship. In the greater Southern Benin and Togo region, many individuals and families demonstrate their respect and offerings for spirits with small shrines both outside of the home, in public places, for Elegba.

Elegba shrines are often an adobe or cement mound of an inverted cone formed with a wide base and rounded top. Red, white and darker remnants of various liquids have dried and crusted on the surface, and sometimes there is a small phallus. Offerings are poured over the top of the rounded tip and drip down. They range from modest, but exposed mound shrines next to a wall, to those with a shade/rain hangar, to those with a fence or even small house-like building enclosing the mound or mounds.

Individual, family, and community practices all form important and specific social contexts for praying and worshiping the spirits. Individuals in both private settings, and also with others present may show respect or make offerings with initiates experiencing insightful dreams. Families have their own familial shrines for ancestor worship. Spirits of the ancestors, known as Egun, referred to as "the returned," in French, "les revenant." The community in Koveto is united behind a hardcore animist king that serves both as political and spiritual leader, reinforcing the village’s level of dedication.

The group featured here composed itself after the main singers came and found whoever was around the main shrine on a Sunday, one of two days of worship during the week. There are various activities, rituals, percussion groups, and a generally loose, party-like atmosphere as moonshine is the beverage of choice. Individuals in front of the main shrine at the time of the recording Representing a variety of age-groups including elders and the main spirit priest, the egalitarian nature in which the village comes together is truly impressive. Music and ritual hold everyone in high spirits with an intense level of social respect for each other and these two sacred days.

Every Sunday and Thursday the village has a communitywide ceremony full of sacrifice, ritual and music. One Sunday, between and during rituals, three of the main singers from the Dognran family sing with friends and family in front of the main shrine and adjacent homes. When approaching the village, the first glimpse of a large, comfortably high, aluminum shade hangar in front of a large building serves as the home of the main fetish and ritual grounds for divination, ritual, prayer sacrifice, ceremony, and music. There is a large room with several fetish shrines for offerings and sacrifice with a large space for meeting and dancing in the shade.

The entrance to the passage leading to the large shade hangar in front of the main shrine runs alongside a stark concrete room that serves as the king’s office and council room of elders. It is the first stop for visitors for greetings, introductions, welcoming and transparency among a council of about 10 men on the main worship days.

The transparent social passage through the hierarchy of the village is not the final approval for matters concerning the sprits. The main diviner and priest places his mat with divination materials including three sets of Fa nut shell chains and a large mound of shells, beads, stones, bones, and other small objects. He faces the shrine and does a reading to determine the spirits input. A chicken was also sacrificed, although slightly casually. The way the chicken dies is also interpreted as either a successful or unsuccessful sacrifice.

An endless number of songs, mostly in the form of proverbs and short parables, usually follow each other without interruption. Three singers demonstrate songs for a variety of spirits, contexts, and dances. The importance of the community forming the underlying rhythms and harmonic choral responses rely on informal participation and general merry-making to fill the space with music of praise, celebration and wisdom.

Although limited in a timeframe and an orientation towards the camera, the music and general atmosphere represents a typical Sunday or Thursday when the village unites in celebration. A group of drummers behind a palm-frond woven fence in a neighboring compound carefully create complicated, sacred, angular rhythms during rituals that last around two hours. In this sense, the clips are more of a fishbowl compartmentalized view of one area of worship, framed for the camera in an otherwise "found" ceremonial arrangement, as opposed to an assembled group for a demonstration.

See all metadata and notes