The Language of African Music: Tamasheq

The Tamasheq language is spoken in Algeria, Burkina Faso, Mali, Niger and Libya 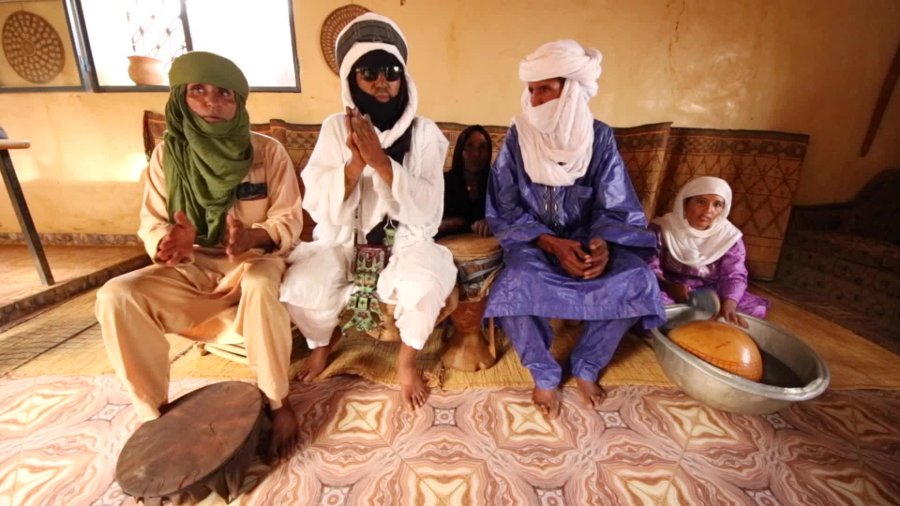 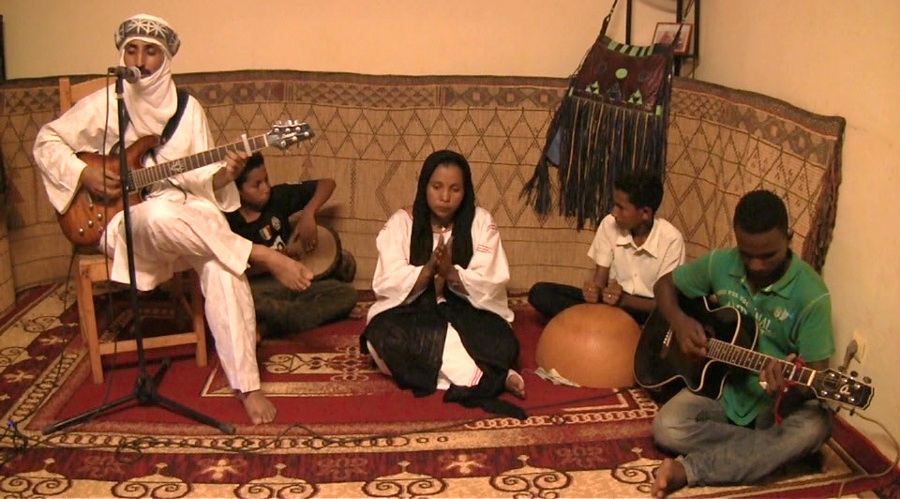 Most Tuareg guitarists in Niger are from the epicenter of the Tuareg Ichumar and Guitar scene, based around the city of Agadez in northern Niger, singing in the Tamasheq dialect known as Tayert. Aroudeini is geographically isolated from the origin of the Nigerien Tuareg guitar scene growing up in the Northern Tillaberi Region, in the Tuareg stronghold of Bankilare, where the dialect is known as Tiwillamit. This dialect is also spoken by Malian Tuaregs to the North of the Tillaberi region and Tahoua in Niger. Now residing in Niamey, Niger’s capital, he is the head technician and programmer for Radio Fidelité.

Aroudeini’s family group, including his wife and two sons, perform original compositions that move a genre often linked to its rebel-based origins into a representation of life’s challenges and ambitions for a better world for Tuareg people. Recorded in Aroudeini’s living room, these three songs represent an anomaly when compared to the common young male Nigerien Tuareg guitarist. The band’s composition and the dialect of Tamasheq, among other features of his style, demonstrate the group’s unique place in the Tuareg guitar genre in Niger.

On a hot day, electrical issues prevented us from recording where we wanted to so we set up in Aroudeini’s living room, a concrete chamber. Because of the weather the room felt like an oven but nevertheless we had to turn the fan off to record. The family dynamic adds to the clip as not only are musicians negotiating their sounds but also husband and wife and father and son dynamics come across through non-verbal communication to check or alter a musical element.

In this isolated, and removed situation, Aroudeini demanded the amp for vocals and the guitar, to get that distorted sound that will lay over the acoustic band backing him up. Cultural values promote a reserved and respectful posture and expression, even while playing music. They could not get the right sound out of the asakalabo (inverted calabash in water struck with a padded wood stick mallet or flip-flop), so the older son Zoucher played with bare hands, adding to the uniqueness. 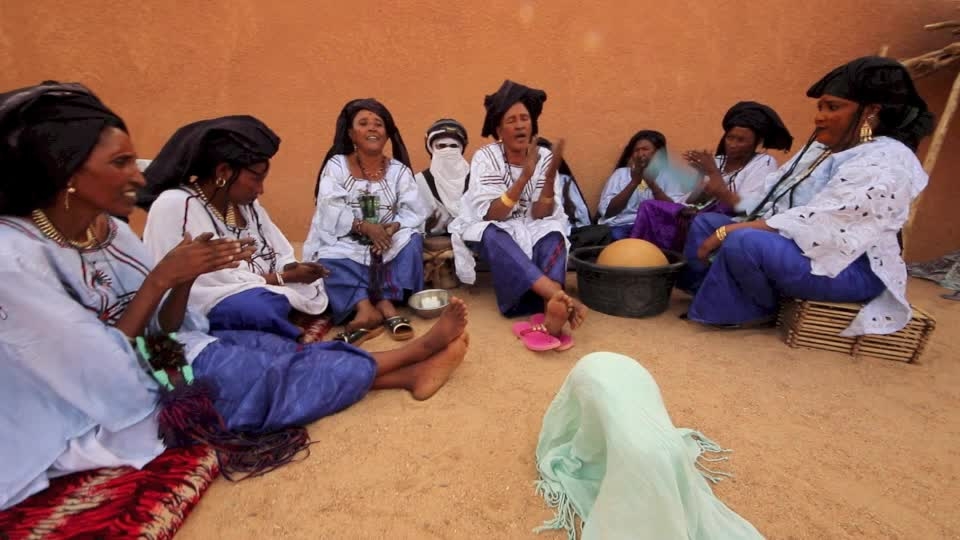 From a village outside of the city of Agadez, Tajajarat can now be considered the outskirts or suburbs of Agadez. Amazingly, Dangash similarly maintains the village flavor and introduces professionalism to the desert Tende genre.

Agadez, now void of tourists due to security threats, has hosted local rebellions, and once had direct flights from France for Saharan tourism. Interest in the Tuareg culture from the tourist heyday from 2000-2005, connected people, and Dangash has had the opportunity to play in several European countries. Several songs played here at home represent a variety of tende styles, old and new, local and regional.

The ensemble features necessary elements including a strong lineup of backup response singers, a very important role that serves to sustain a melodic cycle as the lead vocals slip phrases in between the repeated choral response. Two women sit on pestles to maintain pressure on the attached goatskin, used over a mortar to create a drum. In most areas women play the Tende but in some areas men also play the Tende. Here, the rhythms are vibrantly brought to life with minimalist, yet significantly unfolding patterns.

Recorded at home with Harmattan dust in the air, Dangash was sick with a cold and only able to sing one song, less than she had planned. Having already managed the group and performance, her sister and friends stepped in to sing as they are more than competent lead singers in their own right, simply taking the response singing role to show respect for Dangash. The variety of three lead voices provides for a good example of Tende personalities and tonal and stylistic variations.

As explained in the interview, there are three kinds of Tende. All of the examples here are Tende for men dancers, except “Tendemen,” which is a Tende-n-Amnas, or Camel Tende. For tende for dancers, the women sing and clap, and the men dance, usually in a counter-clockwise circle and then turn to face the tende group individually or occasionally with a friend. The Camel Tende features a fantasia of men riding camels in a circle around a Tende group clumped into a group in the middle. The trot of the camels can coincide with the tempo making for true animal music magic.

The Tende-n-Goumatan, or Tende of the spirits, is a spiritual healing rite women perform on the outskirts of town or camp, when women sway to music, and spirits are exorcised from their bodies. It is a nighttime ritual.

Tende songs are both an archive of different tribunal repertoires and spontaneous creations. This collection deserves mention for its diversity and representation of a range of tende subject matter. The first song is an old standard and an appropriate opener to the style played, followed by “Belho,” or orphan, also from the older songs. “Eshel” refers to the 2009 inundation that swept away entire neighborhoods of Agadez.

“Iman-n-Kusen” is an old song about a woman’s reaction to her husband not returning home from his exode (temporary emigration outside of the country) with the other men. Abadaya is a new song adapted from a lullaby sung as the baby is rhythmically thrown into the air and caught. “Abarad-n-Enamagar” is an old song from the Kel Fedey federation of Tuaregs near Abalama about the bravery of warriors.

“Tendemen” is about a mother who had a beautiful daughter and refused to marry her to the boy she wants. “Tezenut” is called gourd and the gourd is a storage device used to keep milk or yoghurt. This song speaks of a poor jealous woman without animals, that saw a friend with animals go out to pasture. She sang about how the friend had no camels or cows or goats, just a gourd for milk with no milk, as if turning the situation around.

Diversity of songs in this format demonstrates the use of lyrics through the vehicle of a rural music genre. It creates links to incorporate current events, federation specific songs, and cultural events and advice that construct identity from a variety of contexts. All those references are without even diving deeply into the lyrics. 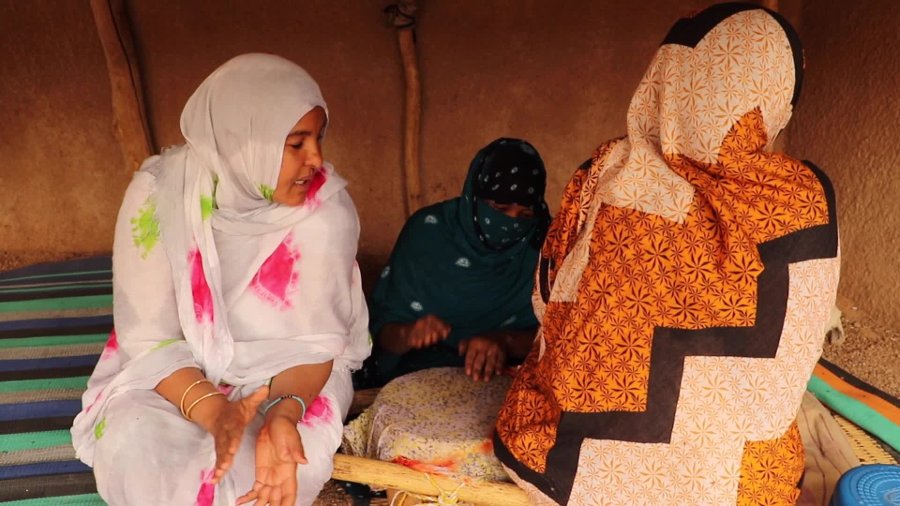 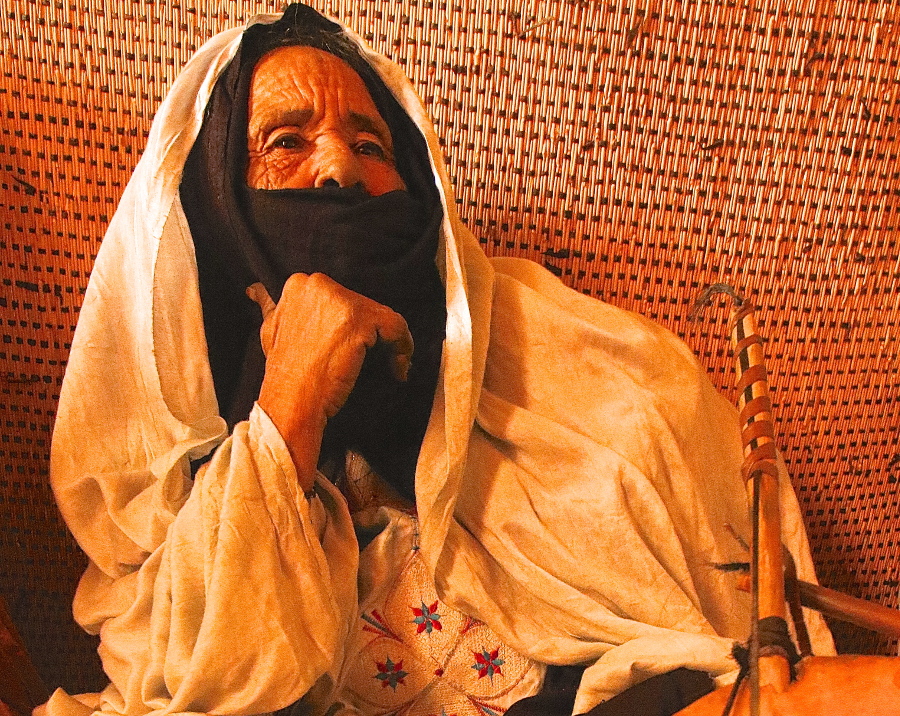 Zahidatou Adham remains alone among anzad players of the Willimiden Tuareg in Niger, although the tradition still exists among the Willimiden across the Mali border to the West. Without any successors, she reminds society of the past almost as a vestige, as if everyone has simply given up on the fiddle and all that it provides. Growing up in the Northern Sahel and Sahara area of the Tahoua Region, a nomadic upbringing includes displacing the family camp and resettling the leather, goat-skin tent so that the camels and goats have enough to eat. The environment and spirits within the landscape motivated Zahidatou to master the anzad and create songs that resound with a noble solitude, a combination of human resilience and vulnerability with the tone of the landscape itself.

Anzad players are women from the noble segments of a hierarchical society and styles differs locally but also among the larger confederates within Tuareg society. For example, among the Kel Ewey from the Air Mountains, the anzad is an austere event where the music accompanies a man reciting poetry. In the Air Mountains, not only does the anzad and poetry carry a dignified, even otherworldly feel to it, but onlookers as well must sit absolutely still out of respect and to fully concentrate and reflect on the art of words. Among the Willimiden, the anzad bow animates with a certain bounce that renders it almostdanceable, and points to the motivational and confident energy the instrument is thought to be capable of producing.

As Zahidatou explains, the importance of the anzad during climactic moments in the lives of individuals and society as a whole underscores the power Willimiden Tuareg attribute to this instrument. During raids or battle the anzad was played behind the warriors as encouragement and a reminder that they could only go forward, as no warrior could return to a community after having returned mid-charge past the anzad player that resonated the force of society during battle. In a similarly important and powerful role, the anzad also healed problems related to the spirit or involved with natural energies and imbalance, and exorcism. The mystical qualities from the sound of the instrument, particularly in the hands of a devoted musician, can be applied to a variety of settings, some disappearing and others changing. Although without society’s encouragement, the Willimiden anzad is not going to be around for much longer in Niger.

The opportunity to see Zahidatou singing is rare as she is a true rural woman, far from the festival scene, in its basic and fairly unorganized form in Niger. However, the mayor from her commune offered transport for her to come to the Sultan’s enthronement festivities and the December 18th celebration in Agadez. Part of the informality present at these events also allows for last minute changes and so she was able to play on stage in the stadium as part of the showcase of musicians despite not being invited.

Following the performance, after everyone had long cleared out of the stadium, I found Zahidatou sitting on the new astro-turf. The recording took place at the home of the family she was staying with on the day of the December 18th national holiday in Niger during an intense dust storm that made the festivities less than desirable to attend. Zahidatou was not parading or attending and so we sheltered inside, away from the horizontal blowing sand and orange fog-like hue. Confined in a small room, others came in and although not at all atmospheric in terms of the landscape that inspired the mystical one-string’s sound, the sound filled the room and the pride and acknowledgement of the importance of this close-up recording was clearly felt.

Respect for elders and reserve are important features of Tuareg behavior and the uplifting spirit of the anzad encourages the two men to jokingly push Zahidatou while playing. Some of the fun-natured playing is comical, the equivalent of hitting an old women, while some has social relationships underlying. For example the noble and smith would have a push and pull relationship as patron and client. In this way, the performance allows for long-term social relations and a general good time to fill the performance space. Zahidatou brightens up and even lovingly lunges back at one point to pay back. A short interview allowed the personality and stories of the anzad to come alive through the view of the last player in the region.