The Language of African Music: Nago

The Nago language is spoken in Benin. 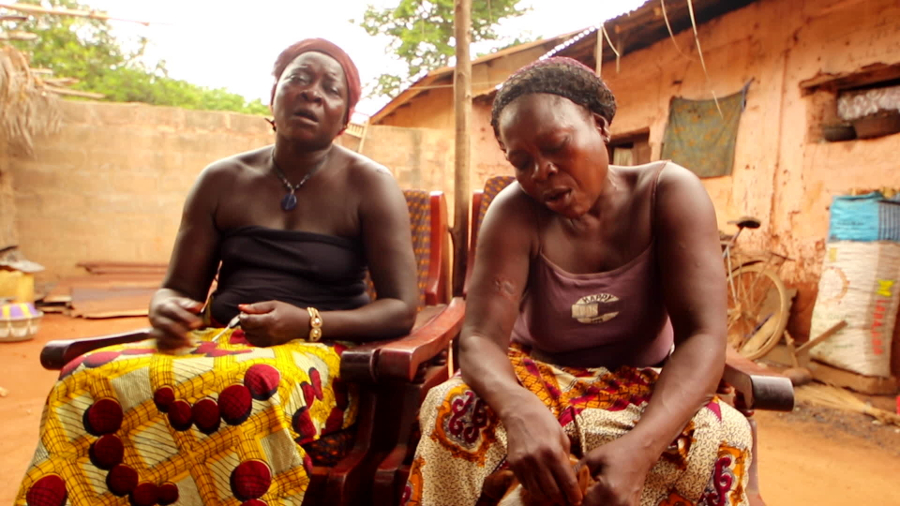 The informal nature of this recording removes the point of describing the artist as a formal group. The two sisters featured here are in a home concession that they share between Ouidah and Cové, just off the paved road along the narrow coast of Benin. The open courtyard with rooms facing inward are typical even for a village highlighting the casual, rural feel of short rests and breaks between household chores. A good-sized living room welcomes visitors with couches made locally by carpenters. A busy kitchen with door opening into the corner of the concession is a central point of activity throughout the day into the night.

After a random phone call, the Okebiyi sisters were basically in the middle of their standard day as they joined each other on a bench they often relax on to demonstrate songs sung in the casual setting of the home. While at work or resting between chores, songs from different genres from traditional to pop appear spontaneously filling the air with melody carried often by one but also with a friend, or in a very small group. The sisters represent a family level familiarity that adds to the simple tone. Occasionally however, the melody inspires off-camera family members, a neighbor, and a friend to introduce a lyric or rhythms by patting the thigh and chest with an open hand. These songs for the ancestors are perfect for this impromptu recording in the family concession. 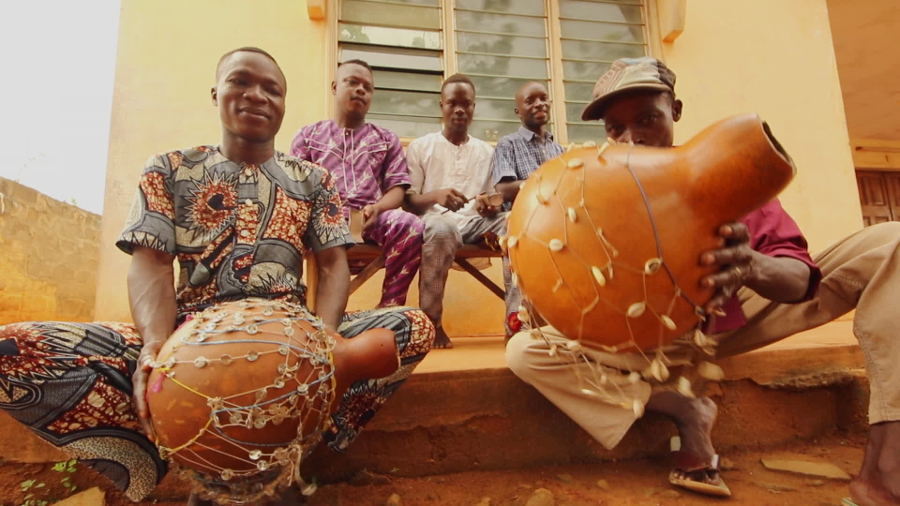 From the Adjido neighborhood on the Southern edge of town, off the road to the beach, Ouidah is a place with a strong colonial history and cultures that thrive on the vodun, or spirits. The Nago in Ouidah have deeply rooted music and ritual traditions despite the proximity to Cotonou, Benin’s largest city and major, coastal port for West Africa. Many ceremonies take place in the concessions of families all over town, and the agbe ka gourd shaker is kept in a shrine dedicated to the sacred instrument.

The gourd with a bead net is not always a sacred instrument. It is a popular instrument in endless styles of music along coastal West African. The sacred agbe ka among the Nago of Ouidah differs physically than the more practical popular kind. A gourd with a particularly bulbous base, with knob-like handle for the stem allows for deep resonant bass thumps. The knob-handle is the main grip although the bass-end also thumps back with a sturdy under-hand hit from the palm. It also has a looser, wider net, and fewer beads or shells than the more common gourd-net shaker. The shape of the agbe ka allows the hands to produce more sounds when directly striking the gourd.

The agbe ka are dedicated to the Egungun, or the “returned,” spirits of the ancestors. The Egungun are an important group of vodun, especially important at the family-level for the Nago. Shrines for families and even lineages often consist of small, iron, cone-headed stakes of various décor. Sometimes they develop over generational time into elaborate alters. Some of the Egungun’s songs require ritual before playing and the agbe ka require permission and generosity in the form of sacrifice.

For a demonstration of paired instruments with a ????? chest and thigh slapper, only two of the three gourds were assembled with two iron ago????. The two agbe ka converse clearer in this smaller arrangement. The bells form alternating rhythms, to emphasize and enjoy the underlying pulse in the absence of a straight-forward tempo-keeper. The presence of the third agbe ka appears only through the offering of sodabi and soda to the third, not present, agbe ka in its place during the small ceremony before the recording.

The larger bulbous area of the gourd is a handful so the preferred posture is an open-armed grip, so that one hand holds the bottom of the gourd, while the other hand holds below the knob on the neck of the gourd. Using a back and forth motion the musician can push, pull and slap, to articulate the syncopating rhythms while allowing for various incidental sounds.

Aside from the physical differences between the more popular gourd-net, musicians perform regular rituals including sacrifice, regular prayer, offerings, and consultation create a multi-faceted role for this instrument in both ceremonial and everyday contexts.

The sacred agbe ka featured here are part of a set of three, housed in a concrete shrine, respectfully attended to as the resting place of a tool used to communicate with the ancestors. Closed-off and enshrined, animal sacrifices made the instruments worthy of sacred and ceremonial treatment, with regular offerings. More often, regular offerings are food and drink, so that musicians and ancestors share meals and drinks together via the agbe ka, as offerings are poured on the ground in front to of the instruments before being consumed. The drinks usually include sodabi, the local, fiery, palm-juice moonshine balanced with a cavity-carving, sweet soda, in this case, electric-bright orange. 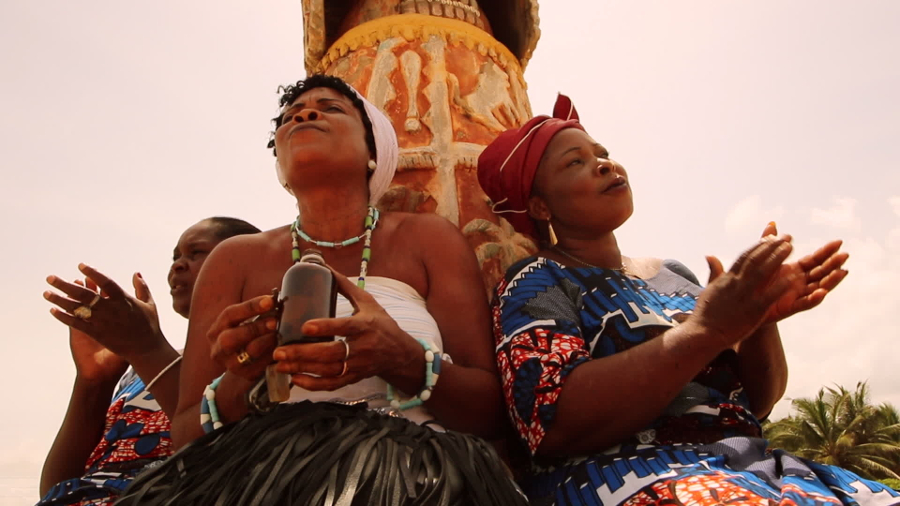 Babalaho Odjo is from a family with strong roots in Ogun worship but is also a talented singer. She is particular about her accompanying singers and will ask friends from outside of town to come in for a special ceremony or when she is invited to sing as a guest. She is from a neighborhood close to the beach, near the lagoon inhabited by fishing families living on stilt houses in the grassy lagoon just inland from the beach.

For this recording, Babalaho Odjo requested to sing a song for Egun and although she did not sing exclusively for Egun, she wanted to go to the coast, to the Point of No Return slavery monument. A local from an old Ouidah lineage requesting to record at the tourist monument would normally seem simply as a way to have a grandeur backdrop with the large archway facing the ocean, aligning the marching of the slaves from town to the journey across the Atlantic. However it was not the large archway that interested Babalaho, it was the cement Egun statues that stand just beyond the larger monument. The Egun represent the returned ancestors and Ouidah’s importance as a central port for the slave trade, and the two Egun statues location close to the buildings that once housed slaves and slavers alike, imbed them with powerful meaning as they look at the very sea that received many of the corpses and sick individuals thrown overboard.