The Language of African Music: Kusaal

The Kusaal language is spoken in Burkina Faso and Ghana 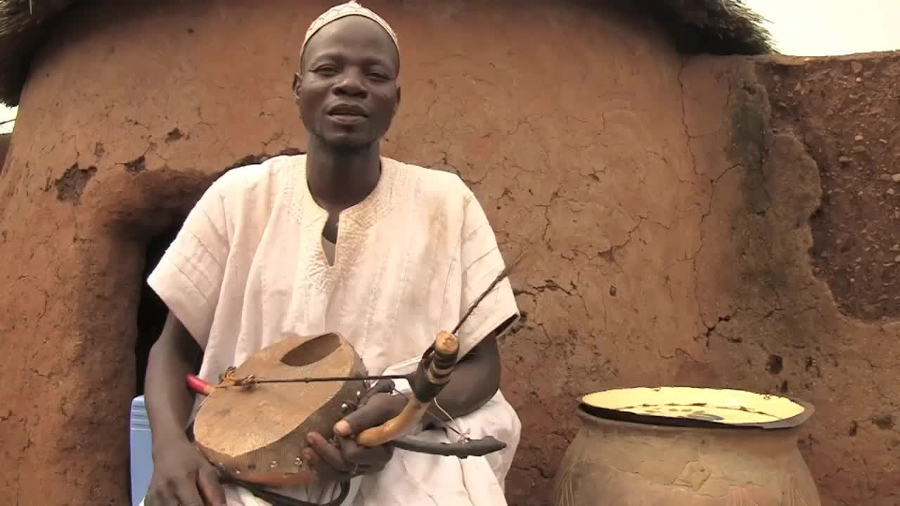 Akparibon represents the pure form of the Kusasi spike-fiddle situated in the heart of the rural hills of the Kusasi homeland. These songs were filmed in his family concession, one of many comfortably scattered throughout the rolling slopes. The most prominent musician of the area, Akparibon takes his music seriously while enjoying the way everybody joins in for a good time.

The Kusasi in this village farm rocky and difficult slopes that often require creating a soil-like environment for individual grain crops to grow by organizing rocks into a pocket to hold soil. The home compounds are grounded with a clay-based plaster that helps to accent the rhythmic steps of flip-flops or rubber shoes. Homes provide smaller settings whereas outdoors, under large trees, is the preferred environment for larger gatherings.

Here neighbors and those working the nearby fields stop by for a good time, spontaneously creating an impromptu party. Shrines to spirits that protect and enlighten him and his music surround the adobe huts that form the compound. His father’s alter lies just outside the only entrance to the home. Present neighbors and others in work clothes from their fields and gardens willingly enter the party grounds.

Songs skillfully build and move from one to another while still making it easy to follow each song’s melody and rhythm, and the changes between songs. The fiddle melody and the response refrain sung by the calabash players make the individual songs clearly identifiable as they change from one to another. A mix of songs, visitor greetings, spirit shrine praise, and a dance routine encourage wide-ranging fun for everyone, and for all ages, on any occasion.

The call and response format encourages a continuous structure for vocal improvisation where the repeated refrain is always a safe place to return to. Akparibo makes it apparent in the performance that he wants the change to be instantaneous with specific pronunciations for the refrains that form rhythmic cycles of their own, setting the pace and tone at the beginning of each song.

Although simply a good time here, this is also a typical ensemble for funerals or other community celebrations for the Kusasi. Funerals are seen as a promotion to the realm of the ancestors, something much larger than the realm of the living, as it encompasses all from the past.

The small calabash shakers work in amazing collaboration to both standardize and embellish the rhythmic foundation. The free-form changes within the rhythmic cycles of shakers establish the casual dance with slight individual variations seen side by side as they line up or stand in a semi-circle. The last segment features a dance for the hunter, displaying individual, punctuated dance steps that follow a three-part sequence: introduction, development, and hunter greeting. 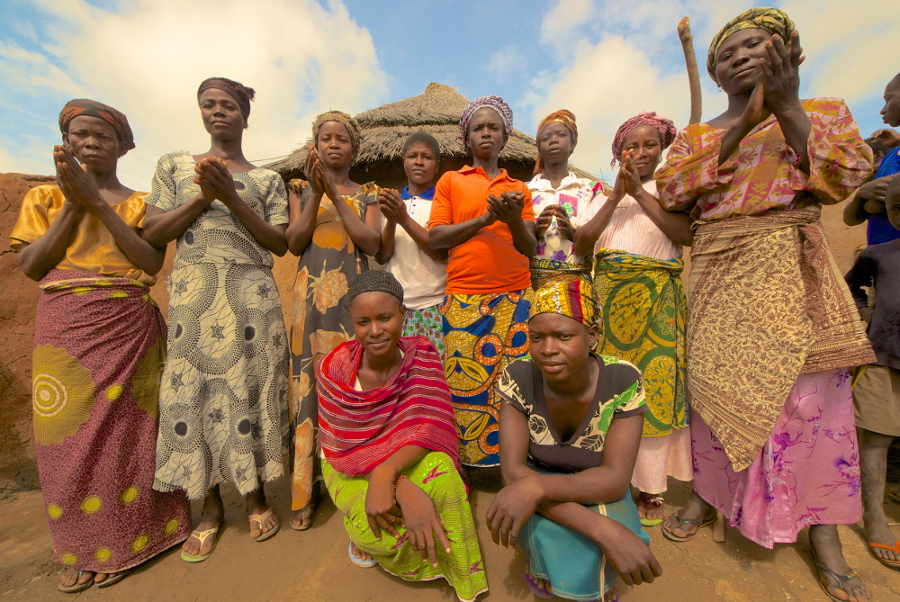 Just as spontaneously as a group of women would form at other social gatherings, this group of women joined the recording party after Akparibon’s spike-fiddle performance. These songs represent songs that women sing while attending community celebrations or other times that women come together.

Kusasi women participate in agriculture in addition to an enormous array of household chores. The diet is mostly based in corn, millet and sorghum, with a couple of local brews, including millet and sorghum beer and a local moonshine. Women highly animate celebrations with dancing and have a relatively free public life, if they find the time.

Young and old feel out the dynamics of the circle including one pregnant and one sick woman, that will and will not dance in their respective turns. An elder woman can be seen at times proud and glad to clap and sing along sitting in her chair close to the women. The pleasure here is seeing that so many different songs and associated dance-steps are covered in a short period of time.

The clapping and dance-steps form the rhythmic structure, high and low, both complementing each other before introducing complementary patterns. The call and response vocals create a beautiful melody that carries in the air until the group confidently responds.