The Language of African Music: Frafra

The Frafra language is spoken in Ghana 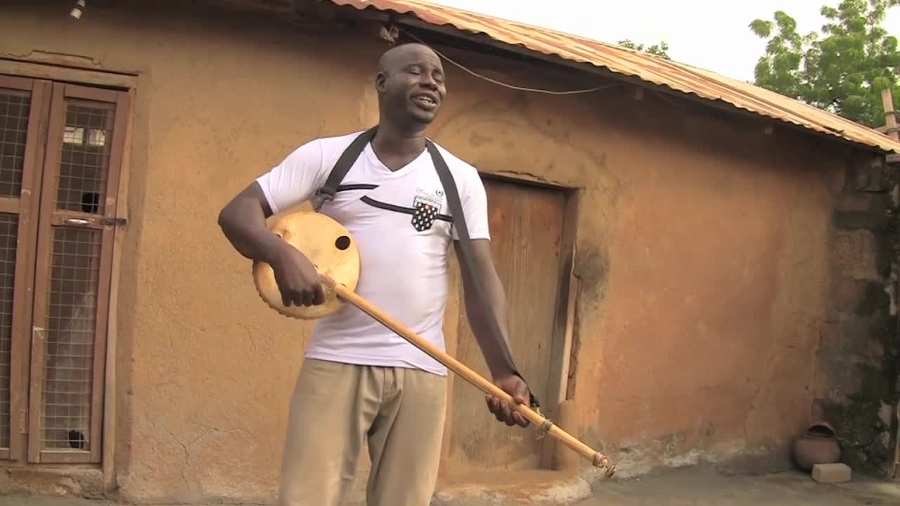 Amodo’s direct relation to the main chief’s family already places him in the cultural forefront but his reputation as one of the best singers and kologo players in the Bolgatanga area is how people know him best. His raspy, easy to identify voice, is known for its Gurune dialect purity in phrasing and lyrics. Recorded in the chief’s family residence surrounding the palace, these three songs use the acoustic kologo with no accompaniment to showcase the all-in-one, more folk-style of performing. Amodo uses a thick piece of plastic to intensify the percussive sound made when striking the strings and leather soundboard.

The kologo genre of music is widely popular and one of the truly popularized folk genres of regional West Africa. The Frafra community listens to this music extensively and neighbors or migrant workers also appreciate their style. Amado’s place as the chief’s son, and as a popular singer in both folk and modern styles of songs, are both consistent with the proud nature of his confident, solo, acoustic performance.

New forms of kologo introduce a repetitive electronic dance pulse to the kologo, which is now the most popular style. Endless numbers of groups create new compositions and produce cd and vcd recordings for local sales and tv music shows. It is a true, local music industry. Although the lyrics are always the focus, the quality of the live accompaniment and the new electronic, drum-machine pulse, follow and adorn the melody and lyrics. In the acoustic format, the clicking of the pick against the strings and skin of the lute is the only strictly rhythmic element.

Many lyrics focus on moral advice or issues that arise to challenge us in our lives. One interesting feature is the long names to the songs, as if they have to describe the entire social context, as this is what truly defines the song, no matter its length. Sometimes these names may be shortened for reference in everyday conversation. Similar to reference to concepts based on longer proverbs, or moral lessons at the end of a story, song titles may be nicknamed in a sense.

Amodo also incorporates stories through song, thereby tying an established story-telling tradition to a new form of communication with new music and lyrical styles. Short songs often play a role in traditional storytelling, usually the chorus of a story has a jingle-like refrain, that may be rather long, or multi-versed. Here, the longer format of songs tells a story engaging listeners with a new platform for telling stories and a longer period of time listening to lyrics in a culture where dancing would usually take the majority of time people spend enjoying music. 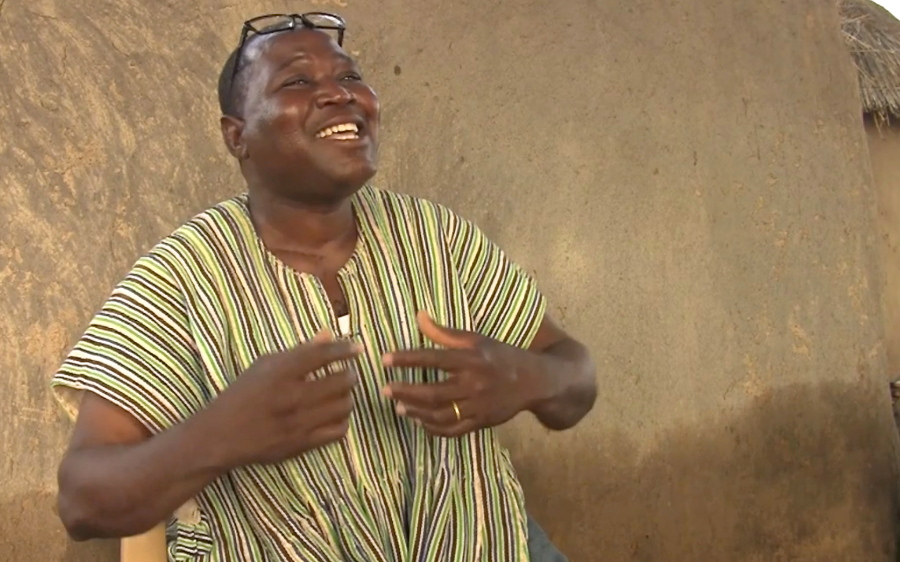 Few people are as dynamically engaged as Gomez Adongo. He is in charge of the civic education office in Bolgatanga, and his major passion and area of expertise is in the oral arts of the Frafra people, in particular the traditions of storytelling and tongue-twisters. Through informal and formal work with Frafra communities, urban and rural schools, and also Frafra language projects, whether paid or volunteered, Gomez is driven to contribute to improving lives and spreading the importance of stories and their linguistic and moral lessons.

Incorporating the public school system in this process is a unique, although obvious choice for Gomez, who sees both storytelling and classrooms as structured education systems. Stories should be an appropriate part of a standard learning for elementary children in Northern Ghana, and elsewhere where similar oral traditions exist. The children’s folktale, mixed with fable and complete with children’s songs, provides a complex for learning in a linguistic structure designed to engage the audience’s attention to participate and learn.

Gomez invited his Uncle to join him to recite a few of the popular stories. Many of the stories his Uncle taught him as a boy, hearing them at night while passing the time. Although difficult to remember at his old age, Uncle Agana chimes in and takes the lead a few times while reminiscing about when he learned the stories as a child, when he told them, and how he now sees the next generation carrying them on as he listens, comments and laughs along. A neighbor also came by to share a story.

The tongue twisters and short songs were spontaneous during a community interview with Gomez and the Dekiyo community following the recording of a performance there. The community enjoyed chiming in and they thereby influenced Gomez’s approach to his interview. The interview turned into the summary of a community discussion, perfect for setting the stage to understanding this story-telling movement in Northern Ghana.

Stories designed for language acquisition, and socio-cultural and moral development, offer a scaffolding of learning areas and a variety of participatory approaches to basic and more complex levels of language development. The scaffold allows one to follow different levels of difficulty and their corresponding level of participation.

The next obvious level of understanding would be to slowly listen to more and more of the story between the chorus or refrain, now standard and memorized. After being able to listen to the entire story, an older child is then able to think more analytically about the message, symbolism, and socio-cultural and linguistic messages woven into the entertaining stories.

The format of the story-telling experience also features inter-generational participation as a standard part of the performer-audience relationship. Not a simple young-old dichotomy, the younger level of participation, as mentioned, includes a variety of levels beginning with incredibly basic sound creation or listening and following along to repeat, so that even with the young age-group the children are also able to perform and help those less able to participate and learn from those more able to participate.

Individual voice and slight changes in format, both intentional and unintentional add to the sociolinguistic nature where voice, public performance and recitation, and language ability define one’s ability as a storyteller. This format aims to preserve transmission while encouraging individual expression as a feature of mastery during a performance. 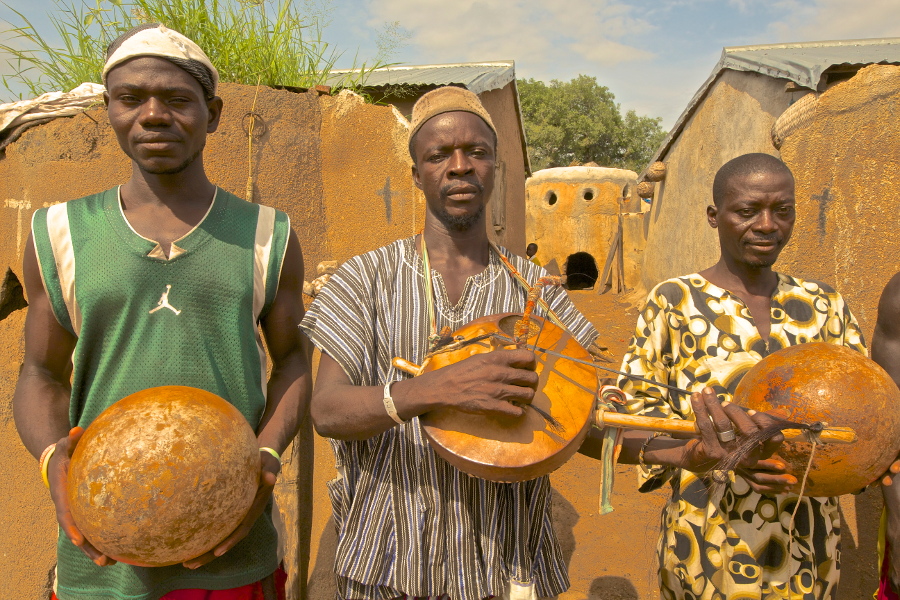 Lolig is from Tengzug, the village name meaning the head of the land, head as in top. This name refers to the elevation of the village set in mysterious rock boulders all over the small saddle valley the village calls its home and spiritual center. The large and impressive chief’s compound and surrounding area is highly visited by tourists through an impressive community eco-cultural tourism initiative for those that go to the Northern region of Ghana.

However, Lolig’s home is located before one reaches the chief compound and visitor center. Lolig receives few visitors and is a major traditionalist, speaking no English and usually wearing locally woven cotton fabrics sewn into pants and a loose shirt. Most drive-by, without noticing the home which faces the field in the back rather than the road, therefore off the many wandering paths of visitors. His skill is well known and his dedication resounds in the vocal intensity that borders a strain or even sacrifice pushing the throat to the edge of expression at times, like pushing out the end of a long breath.

Lolig performed two examples of original songs with family and neighbors, both on and in front of the family concession’s graves. The first is a vocal and spike-fiddle version of a song while the second is more typical of a musical group ensemble for community celebrations. Rather than a performance, adults in the vicinity sat to listen and kids lined up to watch or dance, more like a house party for an extended family.

This family lives in the close quarters of an organically constructed village that grows as sons marry and build their homes and families. Passing the elders graves is the only way in or out of the large family concession. Sacrifice, respect and honor underlie the generally relaxed nature an outsider observes when watching a family sitting, laying out, chatting, or sleeping in the large, smooth, raised graves.

The second track of songs also features some praise-shouting to the neighborhood chief and a short example of a dance style. The fluid journey from singing with the kids dancing, to singing while slow-walking around, to approaching the chief, to kneeling for some praise-shouting, to a short, side-bar dance demonstration, portrays the performance leader aspect that comes so natural to experienced artists. 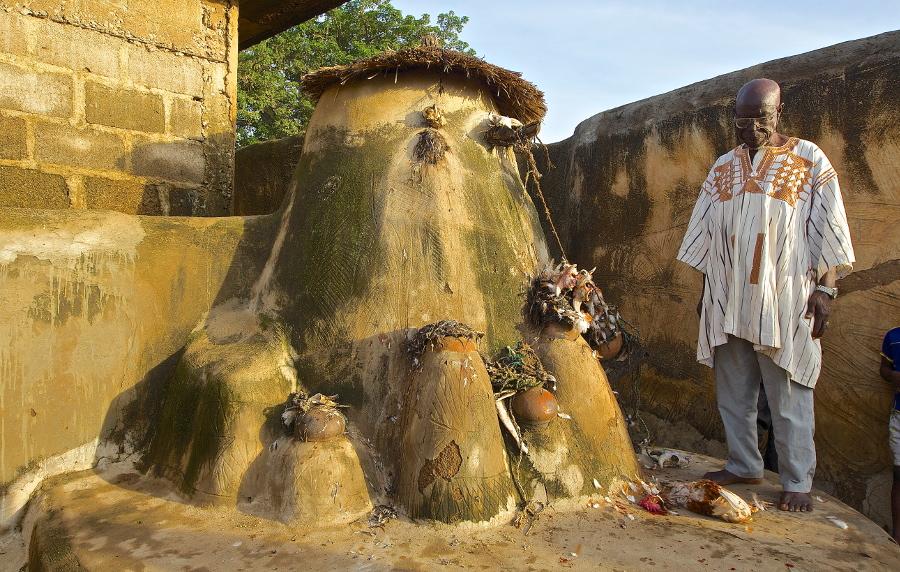 Chief John’s enormous family concession sits in a small saddle between two hills. His home is close to the trail leading to the cave dwelling of the Tengzug’s main spirit, a trail frequented by villagers. The village is highly visited by travellers to the Northern Region with an impressive eco-cultural tourism project. The chief’s compound, surrounding shrines, and sacred cave are the obvious sites to visit with an introduction and welcome by the chief himself. Chief John has twenty wives and over a hundred children, with a few small sons always hanging close-by.

The community practices animism and the chief has his own major alter and elevated grave sites to the major ancestors towards the northern side of the compound. Numerous shrines and bones strung throughout the cryptic alleys of the intriguing, open-air family neighborhood, where even the roof space offers a breeze and a view. Chief John says the whole area has become sacred ground and that the mysterious boulders that surround the valley offer a protective energy to all that come to visit and to see them. The degree to which the chief floods the air with cultural pride and truly lives within his landscape is impressive and respectable.