The Language of African Music: Bwamu

The Bwamu language is spoken in Burkina Faso. 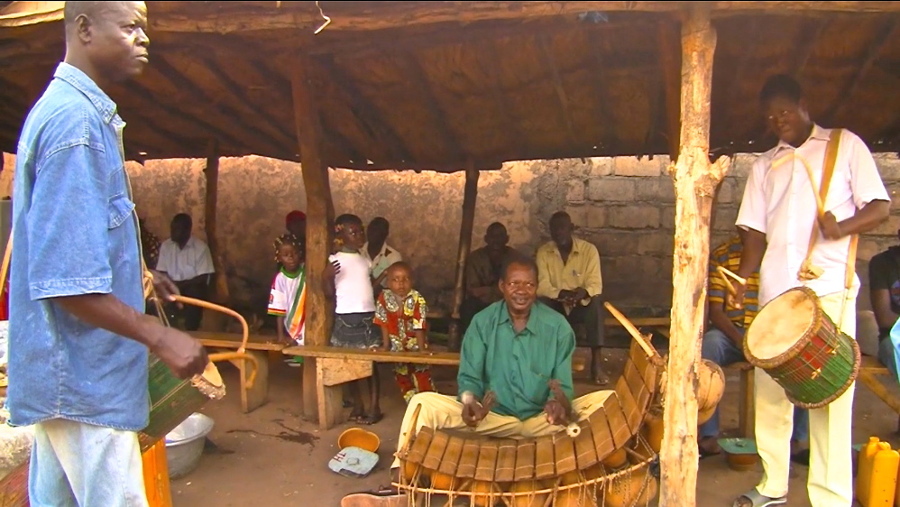 Karafa defines his own existence in the world as a pact between the spirits of the village and his father, Lonbon, the chief’s griot. Karafa is the youngest child in the family, and the only son. So before he was born, his aging father worried that he had no heir to his rich legacy of tchohun music (balaphone). After the appropriate sacrifices to the spirits were made, Karafa was the next child, born with the understanding that his role was to inherit the tradition from his father.

As a typical Bwa child of an artist, Karafa learned to weave hand-spun cotton into cloth and blankets. And yet he also demonstrated himself as a prodigy on the balaphone at a young age. He officially, yet unconventionally, joined the ranks of professionals by playing at his father’s funeral with the master elders at the age of nine. A ceremony and life-benchmark of complex and enormous proportion at such a young age adds to the inertia created by his skillfully crafted strikes.

The shape of the tchohun, the Bwamu word for balaphone, arcs up for the bass keys, and metal rattles worn as horizontal bracelets, thereby accentuating the percussive movement of the hands striking the keys, identifying this instrument and musician as Bwa.

The complex rhythms created by the two drums add to the texture of interlocking patterns, which Karafa uses to alternate between the un-annunciated lyrics and his own percussive melodies or improvisations. His mallets combine interesting divergent, but cyclically connected bass and melody patterns to create a three-dimensional sound with the kasha-kasha rattling of the metal bracelets.

Karafa’s tight, mixed-age group adheres strictly to a high standard of rhythm and melodic percussion. It is quite age-appropriate with the leader Karafa driving the whole team. The two distinctly pitched drums lay out the framework with long cycles of interlocking rhythms, with the slightly older drummer playing the long kerebe drum enforcing the head of the rhythm section. The youngest member sings mostly response and plays with rural dance and enactments of the hunter and farmer in the ironic context of an urban neighborhood, sorghum-beer bar.

At a Bobo-Dioulasso neighborhood dolo (local beer) bar, Karafa plays with his group while neighbors sip home brew from calabashes. The next batch of brewed sorghum beer boils in large clay jugs in the background. Some bars in Bobo-Dioulaso attract certain ethnic groups and this particular bar attracts mainly Bwaba.

Although off camera, seasonal treats also signaled this bar’s Bwaba crowd with a local thick caterpillar delicacy being sold at the food table. Neighboring ethnic groups cringe at the sight of this Bwaba delicacy. The scene at a local bar, best represented by its music, creates spaces for individual ethnic groups to unify in a specific cultural context within a diverse urban environment. The confines of the open-air bar’s concession frame this language-rich event.

Musicians can play for long periods of time. The day can slip away with music, food, the changing crowd and fresh drink. When the dancer said that he wanted to dance a bit, one sign of the endless cycle of brewing needed to be cleared off the ground to make room. The next brew of sorghum grain was drying on a tarp, many of the kernels were still bundled on the head of the stalk. A shard from a clay cauldron holds sorghum boiling away in the background, as waitresses pour beer from bottles into calabashes for everyone spread out on the benches under the shade canopy.

Drinkers cover their calabash and set it down on the ground as the brewers stir the next brew and the music carries the time away. The beer sipped from calabashes, the boiling new brew to the side, the drying grain kernels, the firewood burning and stocked aside, the songs, the people, and the conversations all come and go to their own rhythmic cycle.

Language and music here have parallel features of expression that become increasingly important when music and dance performance engages rural themes and imagery in an urban setting. Ideophonic embellishments to describe the sound or movement may be expressed in language and often vary across cultures. This is like when saying “pop!” or to describe the sound of an instrument with a linguistic representation of its sound like using “kasha-kasha” to refer to a metal shaker. Linguists refer to onomatopoetic expressions like these as ideophones.

The long kerebeh drum in particular uses parallel, what we might refer to as – linguistic embellishments – if we can consider the rhythm as a language. For example, during the first song with an agriculture theme, the long drum mimics the sounds of striking and tearing through the clay soil with the hoe by making a buzzing sound. What in Bwamu might sound more like “krrrrr,” with a rolled “r.” So the drum also responds to lyrics or songs with sounds that represent an activity or other related sound adding to the level of “dialogue” between instruments and lyrics.

The interview features something obvious to a Bwa, but something others would not realize. During the second portion when Seidou is interviewing Karafa, they are speaking in two different dialects of Bwamu. Karafa in Bwamu Kade and Seidou in Twi Bwamu.

This demonstrates something normal to all West Africans: communicating with members of the same ethnic group but from areas that speak different dialects of the same language. In these cases the conversation is often a negotiation between different phrasing, accent, letter-replacement, and even completely different words for the same noun or verb. These dialects are much more drastic in their differences than regional accents. Seidou also is based more in the urban setting of Bobo, with Karafa having a rural foundation as a musician learning heightened language skills at an early age, even though never in the setting of a formal interview.

Back to The Language of African Music