The Language of African Music 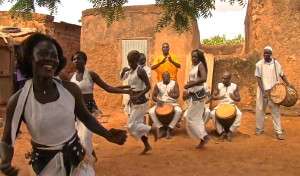 The often-overlooked, rich diversity of African languages resounds strongly in the music traditions of West Africa. Even Africans’ casual use of language often features snippets of poetic performance with a high degree of importance given to the art of conversation including proverbs, cultural values, allegorical references and more. The Language of African Music project archives diverse musical traditions to document musicians’ use of language during performances. Selected video clips of songs and interviews portray the seemingly endless variety of music traditions and languages in West Africa. Transcriptions and translations make these languages accessible. When put to music, African languages take on a new power. Artistic expression ranges in form from a herder’s a cappella improvisations during solitary excursions with the family herds, to families casted into a lineage, focused on inheriting and projecting knowledge through musical performances.

It should be noted that there are some exceptions on this page to music made for interesting oral traditions like stories or incantations, even if they to do not have accompanying music, given that they have poetic and rhythmic elements similar in interest to this project’s theme of language use in the creative arts.

Transcriptions and translations are in progress and those that appear on these pages are in draft form. We are working on completing the transcription and translation for all videos as well as updating the African Language text using African language orthographies.

The videos are arranged by language.

You can locate the videos by country or by artist name as well.