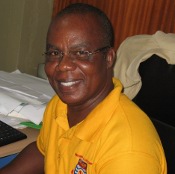 Dr. Torgah is a Senior Lecturer in General Linguistics and the Linguistics of Ewe and Head of the Department of Ghanaian Languages at the University of Cape Coast in Ghana. He carried out his university studies at the University of Cape Coast, at the National University of the Côte d’Ivoire, and also achieved a DEA (Diplôme d’Etude Approfondie) at the University of France-Comté in Besançon, France. As a Senior Lecturer he teaches courses in General Linguistics, in the Linguistics of the Ewe language, and also in the Theory and Practice of Translation. He has a broad range of interests, one of which focuses on the translation of Europhone African Literature into his first language, Ewe. He has published ten or more translations into Ewe with his colleague Atakpa K. Freeman and all have been published by Cambridge University Press. Among the works he has translated that have yet to be published are George Orwell’s Animal Farm, Mariama Bâ’s Une si longue lettre, Aminata Saw Fall’s La Grève des Battus, Kwakuvi Azasu’s The Stool, and Ngugi wa Thiong’o’s The River Between. It is these last three translations that have been chosen for presentation here on the website. A chapter of each one of these is presented. 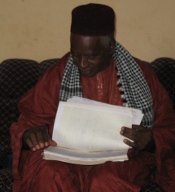 El-Hadj Mahamadou Billo Baldeh Bah was born in 1945 in the village of Compaya, near Labé in the Futa Jalon. The story behind the origin of the name Compaya, according to El-Hadj, is that the name was chosen as a challenge to potential visitors to satisfy their curiosity about the place by coming to Compaya. The name means “If you want to satisfy your curiosity, you should go and look.” In spite of the limits of his exposure to secondary and higher education, he has led a remarkably academic and intellectual life.

He attended the Ecole Primaire of Labé and was awarded his Brevet upon completion. He went on to the Lycée in Labé and was doing quite well until one day he left school not to return. He described the reason why he stopped going to school even though he was doing well. He was coming home from school one day and he met his father in the field working. He observed that his father’s shirt was drenched with sweat and the collar was dirty. He concluded therefore that his family was extremely poor and he quit school immediately to come home and work for his family. He then continued learning on his own and was largely self-taught after that. He eventually was qualified to become a teacher, and he succeeded in passing all of the necessary proficiency exams. He then went on and studied for the language and literature exam of integration to second hierarchy, a university study equivalency test that was offered under the administration of Sekou Touré which enabled those outside of the formal system to earn equivalent academic recognition. He was first in all of Guinea on this exam during 1977-78. In 1986 El-Hadj Bah had the opportunity to recite poetry together with Amadou Hampaté Bah who was his contemporary. Later he started a literary club in Labé called the Club Amadou Hampaté Bah.

El-Hadj Bah was instrumental in organizing a trip by road in 2004, with some of his fellow inhabitants of Compaya, to Mauritania in search of information about the origins of the population of Compaya. In the future he will be telling the story of what they discovered and what they accomplished on this website. It is a remarkable story of family discovery.

Today in his retired years he is thriving as a poet and a writer. The poem that he performs here bears the name of his father, Abdullahi Dyogo, and is dedicated to him. This is one poem from a large collection that he has written. He intends to publish his anthology of poetry, which is now with a publisher, in Pular ajami, Pular latin script and in French. The Pular ajami component of the collection will be printed using the USESCO ajami font.