Documents appearing on this page are manuscripts that have not been formally published and therefore do not occur with a catalog entry on the ALMA E-Books sister site the Digital Library of International Research. 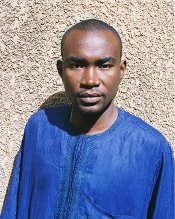 Alhassane Abdou was born in Tillabery, République du Niger, on the 26th of July, 1978. Today he is a radio journalist at the radio station R&M (B.P. 420, Niamey). He attended the experimental school in Tillabery from 1985 to 1991, and received his Certificate of Completion of Primary School diploma at that time. From 1991 to 1997 he studied at the CEGI of Tillabery and received his B.E.P.C. Diploma in 1997. He attended the Tanimoune High School of Tillabery from 1997 to 2000 and attained his BAC A4 Diploma upon completion of his studies there. He studied linguistics at the Université Abdou Moumouni in Niamey from 2000 to 2002, and attended IFTIC (Institute of Training in Information Technology and Communication) from 2002 to 2004, where he studied audiovisual journalism in the superior level section. As a result of his training, he has become an author of Zarma language literature. He has participated in various training programs for authors, and was awarded the Laureat award for African language literature organized by UNESCO and the Basic and Bilingual Education contest in December of 2000. Several of his recent works are presented on the ALMA website.

His book is entitled Kala day da ay caw! (I must go to school!) which deals with the problem of the low rate of girls in school in Niger. The rate of attendance is only about 10%! There are many reasons that are cited for this. In this work, Salamatou is a young girl from a rural area who refused to abandon school to marry her cousin as ordered by her father. And her father’s failure to understand results in her being chased away from the family. She studied and became a teacher, and embraced her future with confidence. She helps her parents whom she has pardoned for the past. She also becomes the conscience of the village of Bibito which she brings up to date on subjects such as early marriage, the Guinea worm, the value of drinkable water, and expecially the importance of parents sending their daughters to school. The chief of the village is convinced by her and gathers his village together to incite them to have their daughters schooled. Salamatou had become the example that had to be followed! 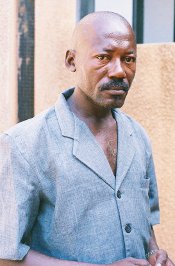 Hamadou was born on the 7th of October 1964 in the town of Ouallam in the Zarmaganda region situated to the north of Niamey. He went to primary and middle school there before entering the Lycée Issa Korombé in Niamey in 1981. Today he is the deputy comptroller of the postal and financial services of the Office National de la Poste et de l’Épargne du Niger (ONPE).

He has twice been decorated as a poet laureat in the national poetry contest (Éclat de vers en transe en 2002 et 2003) and of the national language literature contest (the 2002 edition). Gandozi has published several novellas in the French language in the Sahel Dimanche newspaper (weekly Nigerien news journal).

He is presently preparing to publish a collection of poems entitled Bitti in French, Zarma and Hausa, from which the following poems presented here are extracted:

In the same anthology the following poems will also appear:

Gandozi’s novella entitled Wayyaa tells the story of Wayyaa who quit school after having failed twice on the brevet exam. Very quickly she got married to a young agricultural technician named Arbi. She lived in great happiness, loved by her husband. Wayyaa knew how to attract the admiration of her entire entourage: in-laws, neighbors, and friends of her husband. She was recognized for being nice, respectful and calm.

However, as the Zarma maxim says, “One who is not deceased does not know his potential.” Wayyaa’s life fluctuated (check bascula?). Arbi obtained a scholarship to study abroad and left for four years in France only a few weeks after the birth of Nayé, their first born child.

One day Wayyaa met Kongu, a merchant and friend of Arbi, in the central market. Kongu showed his affection for Wayyaa. (épris???) He used all means to reach his goals: regular visits and gifts. Wayyaa, initially resistant, ended up accepting his advances with the help of a friend, Safiya, single woman, to become the mistress of Kongu. Falling ill with AIDS, Wayyaa ends up taking her own life a few days after the return of her husband. 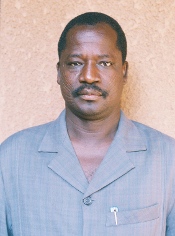 Dobi studied at the Centre de Formation des Cadres de l’Alphabétisation in Niamey. Upon completion of his studies he obtained a certificate attesting to his completion of the three year program in 1981. He has pursued a career as an adult literacy trainer and teacher involved in Hausa language literacy instruction. He taught at the Tilabery literacy training center from 1987 to 1991.

Tatsinniyoyi Hausa (pdf)
Allah ɗaya gari bamban al’adun da suka shafi aure a ƙasar Nijar (pdf)
By Haruna Tankari, Issufu Abubakar, and Bube Dobi
The authors of this book discuss the customs, culture and practice of marriage among the Hausa people of Niger. The examine and describe marriage customs as practiced in Zinder, Maradi, Tahoua and Tamaske.
Manuscript in the Hausa language
18 pages Alio graduated from the Université Abdou Moumouni in Niamey, Niger in 1993 with his master’s degree. Upon completion of his studies, he then taught transcription and writing in Hausa at the same university from 1993 to 1996. During the same period, he also taught French, history, and geography at the Collège la Réussite (Annajah). From 1996-1998, he became a literacy trainer – for Hausa and French – at the departmental inspection office of the Literacy and Adult Training office of the Communauté Urbaine de Niamey. From 1996 to 2004, he held taught French writing in several literacy centers. Presently, Alio Maïnassara is teaching Hausa language translation and literacy techniques and methods at the Centre de Formation des Cadres de l’Alphabétisation in Niamey.

Hanya Maɗaiɗaiciya Don Yaƙi da Talauci (pdf)
By Alio Mainasara and Bube Dobi
The authors of this book lay out a set of strategies to be shared with the entire population of Niger for fighting against poverty. Included in the document is a discussion of the importance of literacy and education as a vital component of the strategies proposed.
Manuscript in the Hausa language
17 pages
Amfanin Yaƙi da Jahilci (pdf)
This manuscript in the Hausa language explains all of the benefits of being literate in one’s own language, and discusses the efforts that Niger has made in pursuit of literacy for all since independence. It discusses the advantages in relation to everyday life, to democracy, to culture, to health, and to marketing and employment.
Manuscript in the Hausa language
26 pages 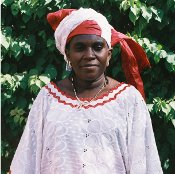 Aishatu was born in Bilma, Niger, in 1959. Bilma is a desert town situated in the Nigerien Tenere desert. After her primary school studies in Agadez and her secondary school studies in Niamey, she entered the University Abdou Mouoouni where she obtained he Licence in the Faculty of Letters, Department of Linguistics. She then worked at the CEG VI in Niamey from 1988 to 1989 as an English teacher, then at the national office of the Direction of Adult Literacy and Training from 1990 to 1992. She is presently the head of the Division of the Development of Bilingual Education at the Direction for the Promotion of Schooling in the Ministry of Basic Education. She is the author of two works in the Kanuri language, her maternal language: Bintu na kanajir ladoyen and Kəndəga Dinaye Sai Kanadi. She also contributed to several works designed for the promotion of bilingual education, including: Dictionnaire bilingue français-kanouri, Grammaire Kanuri (Morphosyntaxe), Arrêté fixant l’orthographe des languges nationales, and the Paradigm of Kanuri Conjugations. She also has translated the following works into Kanuri in an effort to contribute to the print environment for national languages: L’enfant têtu, Karami et son cerceau, and Bintou et Ari. She is married and is the mother of six children.

Kəndəga Dinaye Sai Kanadi (pdf)
By Tawaye Aishatu Shewu Korerom
Editor: Niamey: SIL Niger.
The title of this books cites an expression used by Kanuri elders to say, “Living in the world, patience is necessary”. This book was written in Kanuri to provide reading materials for adults upon completion of their literacy course; this is referred to as post-literacy literature. Aishatu discusses the characteristics of life in this world, and how regardless of one’s circumstances, that there is nothing better than life. She describes the richness of people’s lives regardless of their station in life.
Publication in the Kanuri language
12 pages

Salmu Hassan was born on the 6th of December, 1978, in Niamey, Republic of Niger. Today she lives in the Quartier Poudrière in Niamey. She is married but she does not have children. In addition to her writing, Salmu is a primary school teacher at the Sébéri School in Kollo. She speaks Zarma, Hausa and French and hopes to one day establish her own publishing company. In addition to her novel Bayan Wuya, she has also written the following titles that have yet to be published: Mai Haƙuri, Sa Kai Ya Fi Bauta Ciwo, Wa ya san gobe?, Miya Kaini Soko Rishin Tu Nani?, Komai na Duniya na da Iyaka, Nana Rufaida. 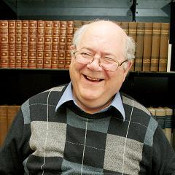 David Westley was born in Madison, Wisconsin, USA and received a Masters in Library Science and a PhD in African Languages and Literature both from the University of Wisconsin. He taught English and African Literature at the Northeast College of Arts and Science in Maiduguri, Nigeria and Hausa and Introductory Linguistics at Bayero University in Kano, Nigeria. He taught Hausa and African Studies courses at Stillman College in Tuscaloosa, Alabama, USA. For the past 24 years he has served as Bibliographer at the African Studies Library at Boston University in Massachusetts, USA. He has published numerous bibliographies and book reviews on many different Africa related topics. He lives in Brookline, Massachusetts, USA. David’s manuscript is an anthology of Hausa folktales that David collected, recorded and transcribed while in Kano, Nigeria in the 1970s. For nearly 30 years, John Hutchison was the Director of the African Language Program at Boston University. He became the Coordinator of the ALMA Project and website in 2002 and continues to work to add to the content for the benefit of African language readers, instructors, and students. He wrote this essay in French in 1991 while in the Republic of Mali on his first sabbatical leave from Boston University. He wrote it for his francophone African colleagues working in bilingual education in national languages. The goal was to make available some of the resources and information on the bilingual education experience from the USA to a broader audience. While working in Mali he asked his colleague Abdoul Kader Sall, a teacher of Bamanankan, French, and English, to translate the document into Bamanankan. Sall was later instrumental in the translation of Ngugi wa Thiongo’s monumental work, Decolonising the Mind, also into Bamanankan (see www.mothertongue.us).