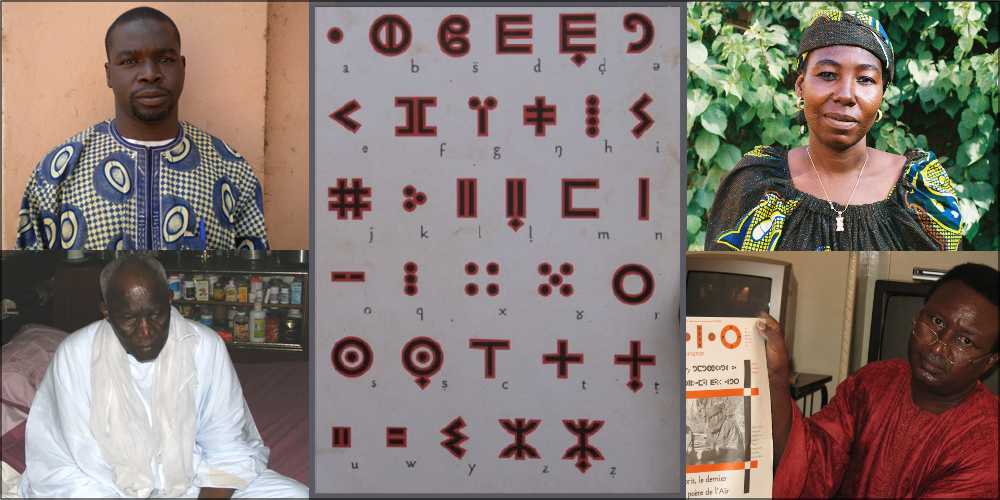 This part of the ALMA website is divided into sections according to the writing system used to express the literature. Here you will find the following three sections:

Ajami (‘ajamī or a’jami) comes from the Arabic word for non-Arab, or foreigner. It also refers to the practice of writing other languages using a modified Arabic script. Although written records are rarely regarded as part of sub-Saharan Africa’s intellectual heritage, important bodies of Ajami literature have existed in Oromo, Somali, Tigrigna, Kiswahili, Amharic, and Malagasy in East Africa, and Bamanakan, Mandinka, Kanuri, Yoruba, Berber, Hausa, Wolof, and Fulfulde in West Africa for centuries. In South Africa, the first written record of Afrikaans was produced in Ajami by Muslim Malay slaves (Pah 2008, 2). Ajami developed in communities with a long history of practicing Islam, and who sought to adapt the Arabic alphabet to their own tongues, first for religious purposes such as prayers, writing magical protective devices, and disseminating religious materials and edicts, and later for secular functions such as commercial and administrative record-keeping, writing eulogies and family genealogies, recording important events such as births, deaths and weddings, and writing biographies, poetry, political satires, advertisements, road signs, public announcements, speeches and personal correspondence. There are also Ajami documents describing traditional treatment of various illnesses, the properties of plants and ways of using them and occult sciences; translations of works from Arabic into African languages; and texts on administrative and diplomatic matters (correspondence between Sultans and provincial rulers), Islamic jurisprudence, behavioral codes, and grammar (Hassane 2008, 115-17).

2.1. Wolofal ajami documents in the Wolof language of Senegal.

All of the following documents of Wolofal ajami (in the Wolof language) have been contributed by Prof. Fallou Ngom of Boston University. Fallou Ngom’s current research interests lie in (1) the interactions between African languages and cultures and non-African languages and cultures, and (2) African primary sources written in non-Latin scripts, especially Ajami (African languages written with the modified Arabic script). His primary goal is to study these sources, from a multidisciplinary perspective, to uncover the insights they hold and to ensure that they are no longer treated as insignificant footnotes, but rather as major sources of local African knowledge. The Wolofal literature that is presented here is representative of ajami documents written in the Wolof language of Senegal, and is particularly related to the Murid practice of Islam in Senegal. Shaykh Ahmadou Bamba (1853-1927) was the founder of the Muridiyya Sufi movement of Senegal, West Africa. He was an eminent Sufi Master. He has millions of followers scattered around the world today. For his followers, his life was a testimony to his commitment to the essence of Islam: fostering righteous living, social wellbeing and spiritual enlightenment for all people. His life was exemplary in that his only ideal was to serve humanity by offering an understanding of Islam that addressed the diverse needs and challenges of people using the Prophetic as a role model. Much of the Wolofal ajami literature is related to the Muridiyya movement and dedicated to the life, ordeals, and poignant lived story and the nonviolence teachings of Shaykh Ahmadou Bamba.

Presentation of two indigenous West African scripts: N’Ko (especially for the Mande Languages) and Tifinagh (for the Tamasheq Language of the Tuareg) (pdf) by Prof. John P. Hutchison.

This Power Point document was presented during an ASA Panel chaired by Prof. John Mugane of Harvard University. It is an introduction to the N’Ko and the Tifinagh scripts, with a comparison of them to the ajami script based on Arabic script but also used to write a variety of West African languages. The three scripts are compared with regard to a number of criteria. 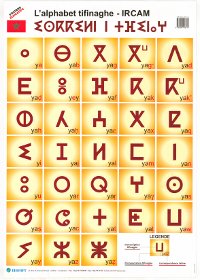 Association for the Promotion of Tifinaghs Script, Republic of Niger 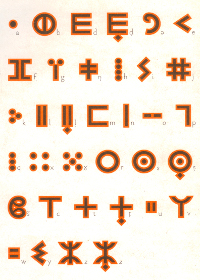 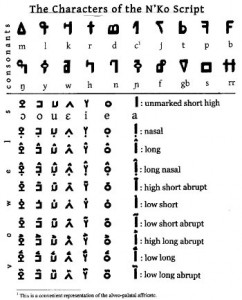 Click to see a larger version of this chart