Languages of Africa and ALMA

The ALMA Project was initiated by the West African Research Center and West African Research Association, and thus has its roots in West Africa. Nevertheless, this new ALMA website includes videos and text also from East and Southern African languages, particularly in the AIV section. ALMA’s vision is to work with authors, editors, educators and publishers from throughout Africa. Participants and contributors from any African country are welcome.

The most widely accepted system of classifying the languages of Africa was done by the well-known anthropological linguist, Joseph Greenberg in the early 1960s, and has generally withstood the test of time.1 Heine and Nurse write in their introduction that:

A recent authority (Grimes (ed.) 1996) puts the number of African languages at 2,035: this number is not fixed, as some languages are still being "discovered", while others with few speakers are being elminated. Excluding languages introduced over the past two millennia or so, such as Arabic, Malagasy, Afrikaans, English, French, Spanish, and Portuguese, this figure of just over 2,000 breaks down into 4 large phyla … [representing] nearly one-third of the world’s languages.2

The 4 phyla of continental African languages are represented in the following map3, which also includes a fifth phylum, Austronesian, to include the Malagasy language of the island of Madagascar. 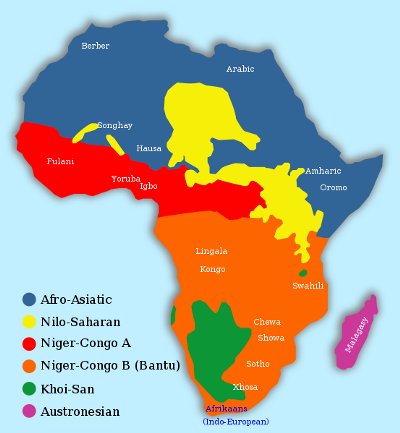 Examining the map and its classification system from north to south, Afroasiatic is the northernmost family. It is the only phylum of the 4 continental phyla which has languages both inside and outside of Africa, including many languages of the Middle East as well as Arabic, Berber and others of North Africa. The Afroasiatic phylum has a total of 371 languages. The Nilo-Saharan family is relatively limited in geographical expanse and quantity of languages, having only 196 languages. The smallest phylum in both senses is the Khoisan family of Southern Africa with only 35 languages. By far the largest phylum in every sense is the Niger-Congo family (originally Niger-Kordofanian in Greenberg’s classification), whose domain stretches from the far coast of West Africa, down along the coast and across the expanse of the continent to East Africa and down to cover most of Southern Africa. Niger-Congo has 1,436 languages of which 500 are members of the Bantu language group.4

There is a wealth of important and interesting sites on the internet treating African languages both collectively and individually, linguistically, historically, anthropoligically and sociologically. A few resources are shown here:

1 Greenberg, Joseph. 1963. The languages of Africa. Bloomington: Indiana University Research Center in Anthropology, Folklore, and Linguistics, Publication no. 25.a

3 This map was taken from the Wikipedia site for Languages of Africa Map Credit: Mark Dingemanse

4 The figures for numbers of languages in each phylum are taken from Heine, Bernd and Derek Nurse, eds. 2000. African Languages – An Introduction. Cambridge: Cambridge University Press. p. 1.